Vegan sausage rolls have been on my list of things to make for perhaps six hundred years (yep, I am vegan Yoda) and I’m please to confirm I’ve FINALLY done it!

I can’t explain, as a northerner, how important sausage rolls were to my upbringing. So to be able to make VEGAN sausage rolls has been a bit of a breakthrough.

They’re surprisingly easy to make and EVEN EASIER to force into your face. I like to serve them with wholegrain mustard (which is becoming a theme on this blog!) and I really think you dudes are going to LOVE them!

What in the hell is a sausage roll!?

So according to my friends over at FACT-BASED website Wikipedia, these guys have been around for E-V-E-R! It’s actually hard to track the origins of sausage rolls, because people have been wrapping meat in other stuff for thousands of years (literally!).

However, because I’m patriotic (I’m actually not, England needs a lot of work) I only care about sausage rolls which have been consumed in this country.

Apparently sausage rolls were a hugely popular dish in London during the Napoleonic war, when they used to be made with all the gross leftover bits of pork (mmm animal toenails!). Traditionally a sausage roll is simply a strip of sausage meat, wrapped in crispy puff pastry.

VEGAN sausage rolls, however, became a part of my life basically from the moment I could eat solid food!

They see me rollin (vegan sausage rolls, to be exact)!

As a vegetarian child who was also spawn of two vegetarian humans, I’ve been eating meat-free British fare for donkeys years! As you might know, I’m also from the north of England.

The regional dish of the north is basically ANYTHING wrapped in pastry. In fact, the nickname for people from my town was literally “pie eaters”, I kid you not. So what could be better than a portable HAND-HELD pie, AKA, a sausage roll!

My mum used to make veggie sausage rolls, back before you could actually buy anything like this and WAY before Greggs brought out their game changing vegan sausage roll. She had to order a vegetarian sausage mix from some mail order catalog and they were STRANGELY delicious but weirdly greasy. So my goal here was to pay homage to and improve on my childhood sausage rolls!

So what’s the process?

It’s a super simple process to make these vegan sausage rolls, especially thanks to the pre-rolled puff pastry I like to use so much! Here’s how to do it – (full recipe at the bottom of the page).

These sausage rolls use both soy mince and mushrooms to make a really meaty textured filling, as well as ensuring they’re nice a high in protein. Cook up your soy mince by boiling in vegetable stock and fry up your onion and mushrooms with a bunch of big flavour bombs like miso paste, soy sauce and marmite!

Once it’s cooked, I like to add some fresh parsley. This just wakes up the flavour and makes everything a little aromatic. You can switch up the herbs if you like!

It’s super essential to make sure your filling is nice and cool before adding it to the pastry. If it’s too hot, it’ll melt the fat in the pastry and you won’t get a delicious crispy puffed sausage roll.

Unravel your pastry and slice it in half. Add your cooled filling in a strip, leaving gaps either side as in the picture above. Fold the pastry over. To seal the pastry, use a fork to press down along the length.

Try not to overfill the vegan sausage rolls. This will stretch the pastry and may cause it to rip!

4. Slice the rolls and egg wash.

Once folded and sealed, slice the sausage rolls. I like to keep them quite large, so I slice into 4 or 5 rolls per strip. You can make them nice and small and slice into 10 instead. Smaller sausage rolls make amazing party food!

Once sliced, whisk together your “egg wash” and and brush over the rolls. This will make sure they brown beautifully!

Season the egg-washed vegan sausage rolls with some flaky sea salt and sprinkle with white sesame seeds. I like to bake mine at 180c for anywhere between 30-40 minutes. It’s just a case of checking on them regularly to make sure they’re not burning.

Once baked, allow them to cool for a little bit before serving. They’ll be mega hot inside.

There are two magic ingredients which make these vegan sausage rolls taste bonkers good. Here they are! You can also buy them by clicking the links below.

Why not try these recipes? 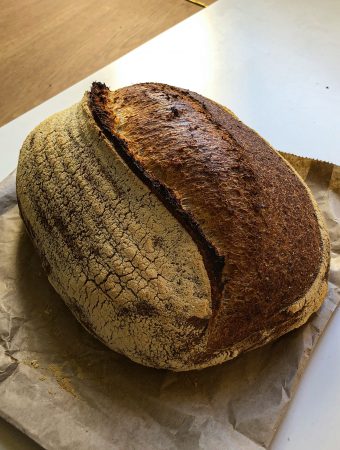