You are here: Home / All Recipes / Vegan Scallion Pancakes

So I’ve begun bulk buying spring onions (aka scallions) because I literally cannot stop making these vegan scallion pancakes. I’m about as English as you can get, so these delicious dudes aren’t something I really experienced until later in life, so let’s just say I’m making up for lost time by literally shoving as many vegan scallion pancakes as I possibly can into my face, all at the same time (today I’ve eaten 6).

I’ve been through some trials to get these fellas even close to the flaky, sexy pancakes I first tried at a vegan street-food market in LA, but I can safely say, we’re there! These guys pull apart like a dream and are crispy and caramelised on the outside without being too doughy on the inside.

OMG how long have you got?? I could talk about these angels all damn day long. These Chinese vegan scallion pancakes are made in a similar way to Indian parathas, whereby a simple wheat-flour dough is layered with oil and coiled up before being flattened into a disc and fried.

The coil structure and the layers of oil give the pancake beautiful flaky layers which pull apart beautifully and feel light rather than stodgy and doughy.

What’s more, the oil we use to form the layers is packed full of fresh scallions (or spring onions, depending on where you’re from) so they’re truly one of the most aromatic, enjoyable things you’ve ever enjoyed.

I’ve included a quick recipe for a tangy, salty dipping sauce, but if you have a fave dipping sauce recipe which you use for dim sum, feel free to switch things up!

How Do I Make Vegan Scallion Pancakes?

As always, the recipe is down the bottom of the page, so scroll on by if you so choose! I’ve broken down the process with some images below though, and I worked very hard on it because I love you very much.

When I say simple, I mean simple. It’s just flour, salt and hot water. I found from my experiments that some people use boiling water, some people use cold water and some people use a blend. For me, the best result was when I used hot water, but not boiling. You don’t need to use a thermometer, just make sure it feels hot to the touch.

The dough will be rough and shaggy to begin with, but keep kneading and it’ll soon come together into a smooth, soft dough. My recipe uses a stand mixer, but you can absolutely make this recipe without. Just mix the dough with a spoon then knead by hand on a clean surface.

This is a tip I picked up from Chez Jorge’s scallion pancake recipe (because he’s a FRICKIN GENIUS). Wrapping the dough and leaving it to rest allows the gluten to relax which makes shaping the pancakes much easier. Just make sure the dough is completely covered otherwise it’ll dry out.

Some recipes call for a simple mixture of oil and scallions, but I found the pancakes turn out best when you make a paste instead. The paste is much thicker and so it’s easier to work with. I found it doesn’t squidge out of the pancakes while you roll them up, so the end result is a lot less messy!

For this, you want to mix the finely chopped scallions with some flour, flaky salt and hot oil. Mix to form a paste and set aside to cool.

This can be a little fiddly, so here’s a step by step process. Firstly you’ll want to divide your dough into 8 portions (mine weighed around 85g each).

Roll out one portion into a 20x8cm rectangle (roughly!). Be sure to keep the other pieces of dough covered to prevent them drying out.

Brush the rectangle with the cooled scallion paste then fold over the two long sides to create a thin strip.

Roll the strip up starting at the short end until you’ve got a neat little snail. Tuck the end of the coil under and sit it with the swirl facing up.

This is a tip I figured out sort of by accident! I found that the pancakes, once formed, were much easier to flatten into gorgeously neat little circles if they’d been rested for another 20 minutes.  Again, be sure to cover them well so they don’t dry out.

Again, a tip I figure out by accident, but I found it works far better to flatten the pancakes carefully with your hand. Many recipes use a rolling pin and on all occasions I found this way too intensive on the dough – the scallions ripped right through and everything became very messy!

Use the flat of your palm to carefully form a nice 15cm-ish circle then fry in a little hot oil! And that’s it! Once fried, serve with your fave dipping sauce or give mine a try!

Some more of my faves!

If you loved this recipe, tell me on instagram! Then why not try out some of my other faves, like: 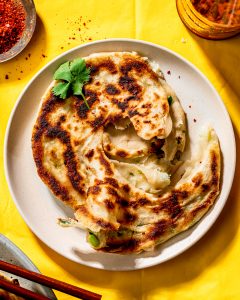 For the Pancake Dough

For the Scallion Paste

For the Dipping Sauce

To Make the Pancake Dough

To Make the Scallion Paste

To Make the Dipping Sauce

To Make the Pancakes