The best vegan cottage pie - ideal for a hearty mid-week dinner with a meaty filling and golden fluffy mash topping.

Raise your hand if you've never had a vegan cottage pie...WHAT?? Rebecca Smith, I don't mean to single you out but HOW have you never enjoyed the umami wonder fluffy mashed potato topped heaven that is a vegan cottage pie!? We could get into the differences between cottage and shepherd's pie (usually something boring about which meat gets used *blurgh*) but since we're not using any meat, CALL THIS DISH WHATEVER YOU LIKE!

There's a lovely old vegan shepherd's pie recipe on this blog from back in the day, but things have changed and we've all grown, so I'd advise using this recipe instead! It goes wonderfully with my braised runner beans or even with my vegan gravy!

What's in a vegan cottage pie?

Here's a little break-down of the ingredients we're going to use in this recipe, to help you get prepped before even stepping into the kitchen - ooh organised!

Obviously see the full recipe at the bottom of the page for quantities.

For the Mashed Potato Topping

Before you panic, this is not the recipe: see the recipe card at the bottom of the page for quantities.

How do I make vegan cottage pie?

As always, the full recipe is down below, but here are a few visuals for you! Sometimes these help if you've never had a vegan cottage pie before (like poor Rebecca). The process is super simple though, so don't be alarmed!

1. Make the mashed potato topping! It's a good idea to chop your potatoes into roughly similar sizes so they all cook at once. This way you won't be shocked by any uncooked centres!

2. Make the vegan cottage pie filling. It's essentially a really simple, rather gravy-heavy ragu. It's traditionally made from beef (and weirdly, no cottages either!?) so use a nice meaty vegan mince/ground.

3. Top the vegan cottage pie with the mashed potatoes. Don't push the mash down too hard though, or you'll make the sauce escape over the edge of the dish! It's also a good idea to start loading the mash from the outsides of the dish and work your way to the centre.

4. Bake and grill the cottage pie. I like to bake my vegan cottage pie without vegan cheese on top, as I find this dried out many vegan cheese brands. If you top with cheese after baking and then grill/broil, you'll get a much tastier looking finish.

Hint: Whether you're making cottage pie, lasagna or shepherd's pie, it's always a smart idea to let the dish rest after cooking for a good 10-20 minutes. Don't worry, it won't lose its heat but it will lose some excess moisture. This means when you spoon out the portion of vegan cottage pie, it's more likely to hold its shape. Cheeky!

As it stands, this vegan cottage pie recipe is already vegetarian, vegan and gluten free (depending on which vegan mince/ground you use) but here are a few tweaks and swapsies you might want to make.

If you've got any suggestions for other swaps, pop them in the comments below for other readers to see. Thank you!

Make it your own!

I've deliberately kept this recipe as close to the classic as possible, but if you'd like to go rogue, why not try these ideas:

This vegan cottage pie is a classic, so I imagine you'll have everything you need to get started, but just in case, here's a list of the bits and bobs you'll require.

How can I store my vegan cottage pie?

Cottage pies are perfect for making in advance. Just allow the pie to cool to room temperature then wrap in aluminium foil and store in the fridge for up to 2 days. To reheat, keep the top covered with foil and place in the oven for around 20 mins at 150c/302f.

When you reheat a single portion of this vegan cottage pie, it's always easiest to microwave for 2 mins. However, once it's hot right through, consider giving it another blast under the grill/broiler. The mash will become super crispy and those edges will be irresistable!

Q: What's the difference between a cottage pie and a shepherd's pie?

A: Traditionally a cottage pie is made with beef and a shepherd's pie is made with lamb (hence shepherd). A vegan variety obviously contains none of these, so the different terms are rendered synonymous!

This is a divisive question! Some people argue peas have no place in a cottage pie but traditionally a cottage pie contains cubes of carrot and peas - since they go together so well! 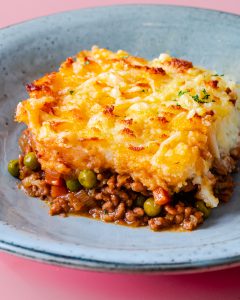 For the Mashed Potato Topping

To Make the Mashed Potato Topping