Winter is officially here, which means you’ve probably already been craving something PRETTTY similar to these sticky vegan apple butter rolls. But trust me, you’ve never tried anything quite like these fellas.

It’s a yeasted recipe, sure, but don’t be put off. What it requires in patience, this recipe gives back as FLAVOUR! Just follow the instructions and then grab a blankie and curl up on top of the tray of warm rolls for a nap. Too sticky? Alright, just eat them instead.

What even are sticky vegan apple butter rolls??

These guys are essentially a hybrid of my two favourite winter treats. Cinnamon rolls x Apple butter! If you’re in the US, you’re probably already convinced, but Europe may not be quite as familiar with the concept of apple butter.

Apple butter is essentially what you get when you cook down fresh, bright, zingy apples with brown sugar and a load of spices over a long period of time. It’s pureed until smooth and then cooked down EVEN FURTHER until it’s spreadable.

It’s perfect on toast, crumpets, scones – you name it. Which explains why it’s so DANG spectacular in these here rolls!

How do I make vegan apple butter??

Well, I’m glad you asked! As always, the full recipe is below in the pink box, but I’m gonna walk you through the process before you jump straight in.

1. Cook down the apples

The first step is to combine your peeled, cored, sliced apples in a saucepan with your sugar and spices and some good apple cider. You want to make sure the apples are good and soft before you puree them, so this may take a fair while – around an hour.

Just stick the lid on and let them simmer away, stirring occasionally.

To get a nice smooth apple butter, use a stick blender to blend everything up once it’s cooked. Return the smooth puree back to the same pan and cook it down even further, until you have a good, smooth, thick consistency.

3. Add the butter and lemon juice.

The vegan butter gives the puree a little richness and helps it to set up into a nice smooth, spreadable apple butter. The lemon juice returns some acidity to the mix, which has mostly been lost in the cooking process.

And that’s it! The process is super simple. You can then jar up your apple butter like a jam or chutney or you can just pop it in a tub, ready to use. It’s best to make sure it’s well chilled before using in this recipe, so cool it down fully before refrigerating.

Only one thing on this occasion!

You can grab my fave stick blender here!

How do I make the sticky vegan apple butter rolls?

This caramel lines the bottom of your baking tray so that when you turn over the rolls after baking them, they’re all beautifully topped with golden brown, gooey caramel!

The process is super simple, just combine the vegan butter and sugar in a saucepan and cook until everything is dissolved and smooth. Add the pecans and then pour into a greased baking tray. Set aside and make your dough!

Again, this process is super simple. Melt your vegan butter and combine it with the vegan milk and sugar. Check that it has a little warmth to it – not hot, just around body temperature, then sprinkle over your yeast.

Leave this bowl alone to allow the yeast to wake up for a few mins. While you wait, mix together your dry ingredients in a separate bowl. Once the milk mixture is foamy and frothy, add it to the flour mixture and mix well. Once you have a sticky mess, stop mixing.

Cover the dough with a damp tea towel and place somewhere out of direct sunlight. Prove the dough at room temperature for an hour. After an hour the dough should have puffed right up.

4. Knock back and shape.

Once proved, you’ll need to knock most of the air out of the dough. To do this, just lightly flour a work surface and tip the dough out. Use your fingertips to push out most of the air bubbles and roughly pat the dough into an oblong.

Dust the top of the dough with flour and roll it out into a rectangle, around 60x30cm. It should be only around a cm thick at this stage.

Cover your rectangle of dough with around half of the apple butter, which should be nice and spreadable by now. Make sure you push the butter all the way to the edges of the rectangle of dough. Sprinkle withe the dark brown sugar.

Starting with the long side furthest from you, start rolling up the dough into a big long snake. Don’t squeeze it too tightly or the apple butter might ooze out. Just keep it delicate.

Next you’ll need to slice your dough snake into 16. It’s best to slice in half and then to cut each half into 8. I like to use a piece of thread instead of a knife. Just work the thread gently under your dough and then bring the two ends over the top of the roll and past eachother before pulling tightly. The thread should slice through very neatly.

Once the dough is sliced, place the rolls onto the pecan caramel in the prepared baking tray. Place in a 180c oven for 25-35 minutes.

Once baked, you’ll have to work rather quickly to flip the rolls over. If you don’t work fast, the caramel will set and they’ll stick to the inside of the tin. Get a large plate or baking tray and place it on top of the rolls. Flip everything upside down and carefully remove the hot baking tray, leaving the rolls behind. They should be beautifully covered with caramel and pecans.

Be sure to leave them to cool for a while before serving. The texture will be best this way as some of the steam needs to evaporate. Serve with a side of the remaining apple butter and HEY PRESTO!

Need more rolls in your life?

You’ve come to the right place! Why not try these bad boys!

Disclosure: some of the links above are affiliate links, meaning at no additional cost to you, I may earn commission when you click through and make a purchase.

For the Apple Butter

For the Pecan Caramel

To Make the Apple Butter

To Make the Pecan Caramel

To Make the Rolls 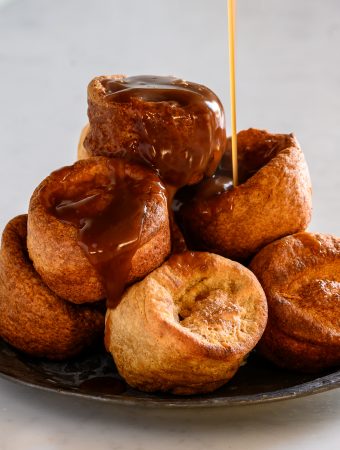 🌿Anything you can cook, I can cook vegan🌿
Food Editor @wickedhealthy⁣⁣⁣
The Vegan Guy @olivemagazine⁣⁣⁣
Best Food Blog 2020 @veganfoodandliving

Anyone in need of a ray of sunshine today? I’m b

If you’re wondering why this makes for such an u

It was my 33rd birthday last week. It feels weird

Thanks to everyone visiting schoolnightvegan.com -

The news is still looking pretty terrifying here i

You’ve helped raise over $200 for @freeblackuni

Error: API requests are being delayed for this account. New posts will not be retrieved.