The absolute peak of vegan roast potatoes - insanely fluffy inside and staggeringly crispy outside with zero duck fat (obvs)!

I've toyed with posting a vegan roast potatoes recipe for AGES now and BOY am I glad I finally decided to! They're one of those recipes which is super easy to veganise, so I often wonder if you actually need my help to make them. So instead of my usual veganising process, I decided to do an OPTIMISING process! The recipe and method on this page is you GUARANTEED ticket to the crispiest, fluffiest roast potatoes with ZERO animal fat required (coz it's bleurgh obvs).

Obviously you're gonna share these vegan roast potatoes with a big slap-up dinner, so why not stick my vegan turkey roast OR vegan roast beef on your to-make schedule!? Oh and don't you DARE make these without my vegan gravy or I'll call the police!

Which ingredients do I need?

Luckily, this one's super simple. Obviously see the full recipe at the bottom of the page for quantities, but in the meantime here are the ingredients with a couple notes to get you DETAIL ORIENTED folk started!

Before you panic, this is not the recipe: see the recipe card at the bottom of the page for quantities.

How do I make vegan roast potatoes?

As always, the full recipe is down below, but here are a few visuals for you! The glory of this recipe is mostly in the technique, so PAY ATTENTION! Or I'll sit you in the naughty chair.

1. Peel and slice the potatoes! It's really important to aim for potatoes which are roughly the same size. You also don't want potatoes much bigger or smaller than 5cm. Deviating from this will affect how quickly they par-boil.

2. Boil and drain the potatoes! Stick to a strict 8 minutes in seasoned water please. We only want to cook the potatoes enough to soften the outsides. Not to cook them all the way through.

3. Rough up the potatoes! The easiest way to do this is to place the lid on the pan you used to par-boil and shake it up and down! The exteriors should look fluffy and floury, which will result in crispier potatoes! Trust me!

4. Heat and infuse your oil! Before roasting, you want to get your sunflower oil nice and hot! This is also a good chance to infuse the oil with a bunch of flavour, so stick some rosemary in there too!

6. Drain and roast again! For the second roast we're going to drain off all the oil, sprinkle with flaky sea salt and roast the potatoes again in the same tray. Guaranteed super crispy vegan roast potatoes!

Hint: It's a good idea to flip the vegan roast potatoes half-way through their first roast. However, be super careful with them, as they'll still be quite soft at this stage. We all love one or two tiny crispy roasties, but a whole tray of them isn't fun!

With such a small ingredients list, it's difficult to think of subs and swaps for you, but here are a few ideas!

If you've got any suggestions for other swaps, pop them in the comments below for other readers to see. Thank you!

Simple recipes are so fun to customise and my vegan roast potatoes are no different. Here are some ideas I want to try:

Remember, it's not too late to change your mind and ask for vegan mashed potatoes instead! Whatever floats your boat!

Keep an eye on your vegan roast potatoes while they're in the oven. If they're browning more slowly than you'd like, crank up the temperature to 220c/430f for the second roast. That'll get some colour on their cheeks!

Q: Which oil is best for vegan roast potatoes?

A: Sunflower oil is the best for guaranteed crispy roast potato exteriors. Olive oil and coconut oil both have low smoking point, which means they'll burn and alter the flavour of your vegan roast potatoes before they can reach the correct temperature.

Q: Which potatoes are best for roasting?

Q: Should I parboil my roast potatoes?

A: If you want extra crispy potatoes with a perfectly cooked middle it's essential to parboil your roast potatoes. Just 8 minutes in salted water should do nicely and be sure to shake them up before adding to the hot oil. 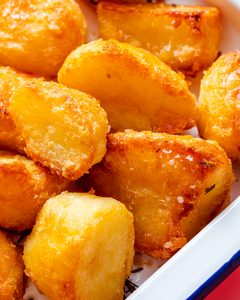