Vegan dan dan noodles with a bumper kick of Szechuan pepper and subtle Chinese 5 spice. Made creamy with peanut butter and tahini, these are some seriously addictive noodles!

Hands-down, my fave vegan dan dan noodles recipe in the world - even if I say so myself!

I can afford to brag because this recipe is almost entirely based on the epic Freddie Janssen (aka @freddielookatme) recipe for Dan Dan Noodles with minced pork.

She’s a genius and, unlike me, is an actual trained chef. Therefore her recipe was honourably challenging and included making the Szechuan chilli oil from scratch, along with the pickled mustard greens (she’s a pickle pro).

Tricky but worth it!

Needless to say, I’ve cute a few corners, but that doesn’t mean this vegan dan dan noodles recipe is easy.

For starters there are a few ingredients on here which you’ll have to get from your local oriental food market. I’ve made a few notes on the key ingredients below.

But, if you stick with it, I guarantee you that this recipe will blow your mind. It’s insanely comforting and actually not a hot spicy as you’d imagine.

The Szechuan spice if much more interesting than straight chilli - it’s tingly rather than burny, so you’ll be able to get through a good trough of noodles before having to wipe your brow! Enjoy!

The ingredients list for these vegan dan dan noodles is pretty involved, but you should be able to find everything with relative ease at any good Chinese supermarket or on Amazon if needs be!

Here are some ingredients which really need to feature in the recipe. 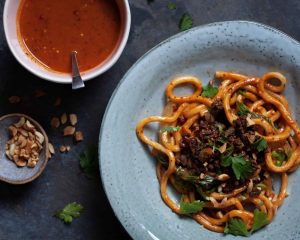 To Make the Mince

To Make the Sauce

To Make the Noodles