Vegan frangipane tarts packed with apricots and beautifully aromatic cardamom. These guys are so delicious and delicate - perfect with an afternoon coffee!

Vegan frangipane tarts made with apricots and cracked cardamom seeds. These are deliciously delicate, aromatic with almond essence and delightfully moist! The pastry is crisp and the filling is light, fluffy and rich (frangipane is honestly one of my favourite things in the whole wide world!).

The fruit is such a beautifully sharp addition, cutting through the mellow sweetness of the frangipane. I use apricots but I've included some suggestions for swaps and subs (damsons, I'm looking at you!).

If, like me, you were heart broken at the idea of saying goodbye to frangipane when you first went vegan, then you're going to LOVE these bad boys! It's an essential late summer dessert for when fresh fruit is everywhere!

What is a vegan frangipane tart?

If you've never tried frangipane before, you're really missing out! Frangipane is a super old Italian ingredient for making desserts. It's a sweet paste made from ground almonds, usually featuring both eggs and butter (but obvs not this one!). When baked, it puffs beautifully and hugs any fruit you might pop in there.

It's perfect for filling tarts because, like custard, it sets but remains beautifully moist and sweet. Traditionally it involves some sort of fruit but doesn't have to. I love to pick slightly sharp fruits when making frangipane desserts, just to make sure the acidity cuts through all that mellow nutty sweetness.

There are a couple of magic ingredients which makes this recipe EXTRA special. Here they are:

Chances are you've come across aquafaba by now. If not, it's the water that you find in the can when you open a can of chickpeas. Yes, it's that simple - the stuff you normally pour away down the drain.

It behaves almost exactly like egg whites, so it helps to keep this frangipane really light, fluffy and moist (sorry for saying that word so much guys - but find me a better one and I'll use it!).

Aquafaba works best when chilled, so I'd advise that you chill your can of chickpeas before opening it for 24 hours.

I'm fairly sure people can find pre-rolled pastry all over the place! The thing most people don't know is that the majority of ready-made pastry is 100% VEGAN!

Yep! Puff pastry, filo and shortcrust! Most of them use vegetable based fats instead of butter, so they're good to go! For this recipe I like to roll shop-bought shortcrust out a little bit thinner, but this isn't strictly necessary.

You will need to pre-bake the crust before filling with the frangipane and I'd strongly suggest you use tin foil to cover the edges of the crust to ensure they don't burn!

Ground almonds bring both flavour and texture to this dish. They hold onto moisture in a MAGICAL way which gives frangipane its characteristic texture!

Here's the deal though. Once opened, ground almonds go bad really fast! If you bought some for Christmas last year then chances are they're not good to use! I recommend getting a fresh pack for this recipe as they're super integral to this recipe!

This recipe is TRIED and TESTED but hey, I get it! You're all individuals with individual tastes! There's no need to copy this recipe EXACTLY, feel free to sub things out! Here are some of my suggestions:

Like I said above, these guys are integral to both the flavour and texture of this dessert, but there's no reason why you couldn't replace them with another ground nut! Why not try with ground pistachios!

I've hinted at this throughout, but here's where you can get crazy! This recipe works with practically all fruit! The best buddies of frangipane tend to be stone fruits, so think nectarines, peaches, plums and damsons.

However, I have to say, the best frangipane tart I've EVER had was made with figs! If you have access to delicious fresh figs, why not make FIG tarts instead.

This recipe also works with most berries. For instance, it's blackberry season in the UK right now. HINT HINT!

Why not try making these guys!? 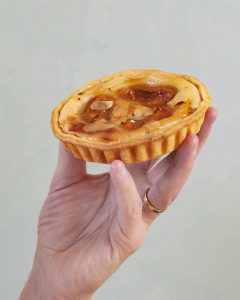