Yes, it’s February. Yes, this is a lolly recipe. But right now by the seaside in the south of England it’s 18 degrees and I have a slightly red nose (I EVEN WORE SHORTS TODAY). So yeah, it’s time for a lolly recipe! Also, for clarity, a “lolly ice” is the same thing as an “ice lolly”, but I’m from Liverpool and we say things a little backwards sometimes - don’t fear it, embrace it!

These lollies are CREAMY A.F. The chocolate has a beautiful SNAP to it and the toasted coconut is next level! You will need a lolly mould but they go for super cheap on Amazon! 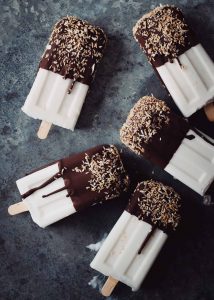 Richard Makin
These lollies are CREAMY A.F. The chocolate has a beautiful SNAP to it and the toasted coconut is next level!
No ratings yet
Print Recipe Pin Recipe

For the Chocolate Dip

To Make the Lollies

To Make the Chocolate Dip